From World of Entorais Wiki
Jump to navigationJump to search 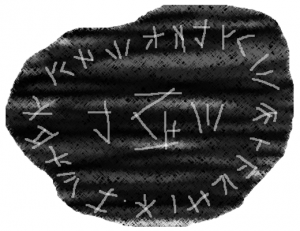 This is an excerpt from the collected works of Meihas Far Walker Vorshaus, a Waejiran and lay member of the Temple of Vorsha. Meihas has undertaken the role of a mendicant naturalist and historian. As such, he records written accounts of his travels, which he has delivered to the Temple of Vorsha in Aerimadur, Waejir. This account describes Meihas's first encounter with members of the Etausi species.

Having chosen to climb the escarpment and travel along the crest to avoid the marshy ground at its base I found a game trail. Presumably, local wildlife preferred the higher ground as well. The bluff had a back-slope, and a small river ran parallel to my chosen route. As I travelled I could hear some falling water ahead, and was eager to take in the view from above this unseen falls.

The trees cleared and I found what I initially thought was a tribal marker, denoting the bounds of some claimed territory. A forked cedar branch had been propped up by a mound of stones some three feet in diameter. Strung from the branch by leather thongs were carved tokens of bone, stone and wood, and a hardened clay disc about the size of my palm, marked with unrecognizable runes. I have included a rubbing I made of this ornament.

I looked about the clearing and saw several more of these markers, arranged seemingly haphazard manner, but all had a similar decorated branch. It wasn’t a tribal border at all, the piled stones were graves. I was already well inside the territory of some unknown peoples, and treading amongst their dead.

I recited a short prayer for the unknown departed and hurried through the clearing, leaving the graves disturbed no further. Upon reaching the far side and the welcoming shade of the trees again, I was stopped by a figure on the trail before me. It stood about a head shorter than myself, was leaner, by half, and carried a stone tipped spear in one of its four hands.

It made a gesture bringing all four hands together at the centre of its chest and then spreading them outward, palms open, except for the hand which held the spear. Not being sure what else I could do, I did my best to mimic the gesture.

It was at this exact moment that the blue twin-crested peeper whom I had befriended a while back, with a sample of my rations and some grubs from a dead log, decided to leave its perch in my pack, and climb atop my head. Seeing this, the strange figure gave a whistled-snorting sound and made a drawing in gesture with one hand. I can only presume it was a laugh, as I must have looked ridiculous in anyone’s eyes with my warbling lizard for a hat.

I was fairly certain its intentions were benign. In my experience, anything wanting to eat a person doesn’t bother to invite them to walk themselves to the larder. So, with a small lizard still adorning my head, I followed. As we walked, two more of these strange beings melted out of the woods and fell in step behind me, the green and brown hues of their scales made for excellent camouflage.

The falls it turns out was formed by several brooks and streams all coming together at a small canyon carved into the bluff over time. The rushing water, and my guide, disappeared over the edge into a narrow cleft in the rocks.

Peering over the edge I saw that a deep grotto had formed, extending well back from opening. Thick vines descended to the surface of a dark pool, and my host was climbing down them with alacrity I could not dream to replicate. I glanced back towards the way I had come from beyond the shoulders of my twin escorts, and began my own descent. - Meihas Far Walker Vorshaus, Naturalist, Historian, Lay member of the Temple of Vorsha